You are here: Home / Book reviews / Kingpin by Sarah Bartholomeusz 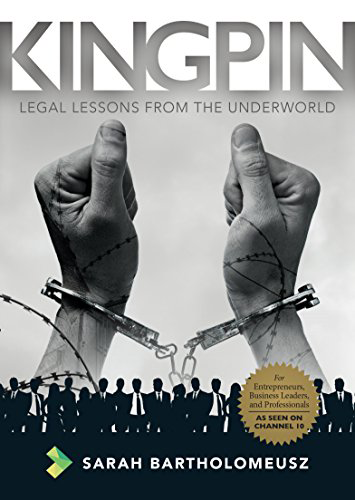 When I first heard of this book I was intrigued. The idea of studying drug dealers “modus operandi” seemed refreshingly new for the world of business books, where recycling and repackaging established ideas and methods is the norm.

Let’s begin by looking at the structure of the book. It is written by a solicitor so as you might expect it is reassuringly expensive.

It’s a small grey 140-page hardback with an illustrated loose cover. The cover shows a pair of handcuffed wrists above which is the legend “A fascinating book”, a quote ascribed to Ita Buttrose (a name that makes me think of Bart Simpson’s prank calls to Moe’s Tavern).

The first 6 pages are testimonials, then 3 pages of foreword and a 6-page preface before we even get to Chapter 1.

This book has a lot of padding: each of the 7 Kingpins provides an excuse to pad out the content with one or more policy documents; in Ch1 for example “Diversity Policy” and “Wholesale Procurement Policy”, “Delegation of authority”, “Risk Management Policy”, “Customer Service and Complaints Policy”. This seems to me a cut and paste job from “the lawyers book of commonly used contracts”. Annoying!

And some of the “lessons” seemed a bit trite.

Bill, I am sorry to miss your book review. If you’d like my thoughts, I have to say it was one of the most boring books I have read in a long time, I really struggled to finish it. The concept and the title were intriguing but I found the content very formulaic and the prose leaden.

Hard to argue with your analysis ? I will include this in the discussion.

Summary notes on each chapter

Ch 1 An overview of the drug trade

Essentially we have a market in the first world for a product from the third world apparently brokered by intermediaries in South America and Asia. Surprisingly no mention of Russia.

Suppliers can be criminals or businessmen, or a bit of each.

–        Keep stock moving and disperse it into small portions

Mental rehearsal – “back tracking” covering every detail of operation

Innovation: hiding drugs under coffins and in furniture.

Died of natural causes at age 63

Cocaine to New York from Columbia.

Used fear and murder (200 people) to get and hold power

Controlled all distribution chain from procurement to delivery

Never outsource what you are best at

Don’t upset your community, keep on good terms with your neighbours

Still alive but under threat, £1.8Bn of assets recently seized in Emirates.

Tunnels are his trade mark. Cross border to US from Mexico and to escape from prison (first time in a laundry truck, second time by tunnel)

Do not become complacent after success

A community leader in Tivoli Gardens

Enforced rule with US weapons

Use the resources that are under your nose

After Tivoli Gardens massacre extradited to US

For me this chapter seemed irrelevant, just a rehash of what has gone before.

Ch 10 Conclusion: one of the best chapters, pp136-138 does a good job of summarising the skills and business practices, strengths and weaknesses of the 7 models.

The classic career profile: learn the trade, use family connections and introductions. Rise through the levels until you are in charge. Then it gets tricky. Once the money starts rolling in how do you cope?

The demise of the kingpins came about when they got careless or their luck ran out. Sometimes greed or just momentum as profits accelerated, led to lavish spending and philanthropy. The business got too big to conceal and brought attention from rivals or law enforcers. We saw how violence and intimidation eventually backfires. It leads to loss of support and creates enemies.

Breaking Bad – HBO especially SE04 EP5,6 how to set up a legit business as front to launder money

Mental rehearsal – “back tracking” as used by Frank Lucas