You are here: Home / Book reviews / Surely You Are Joking Mr Feynman 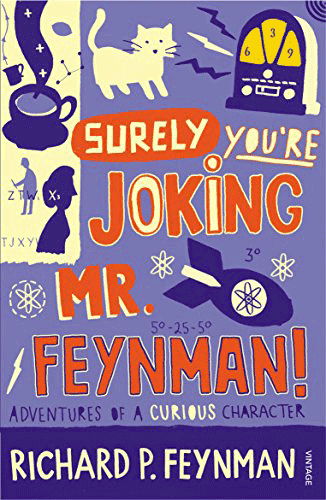 A collection of stories told to Ralph Leighton over a 7‐year period.

Born in 1918 – he would be 100 this year if still alive. A comment on the times in which he lived. Richard Feynman’s career took off towards the end of WW2, the mid to late 40’s. The 50’s and 60’s in USA were a time of overt recreational drug use and female liberation as contraceptives became widely available. Social norms have changed a lot since then and what looks to us now as sexist remarks and misogynism would have been considered quite normal behaviour at the time.

He treated life as a series of problems to be solved, preferably by logic and scientific method. Phenomenon – hypothesis – proof – repeat, until we have a theory. If the theory stands up to every challenge, eventually it becomes a Law. Note the meaning of ‘proof’ in the scientific sense. It means ‘test’ eg the proof of the pudding.

RF hated teaching methods that instilled facts by rote learning and left the student unable to apply what he had learned. He was very impressed when someone used common sense to find a solution to a problem. He was intolerant of pomposity and stupidity, jobsworths were fair game and sport to his intellect: Getting around the army censor. Pressing the buttons on the army psychiatrist – which nearly backfired.

But we are here to look for Business lessons: 10 dominant themes

1 Experts are not infallible

2 Do not trust research without testing it for yourself

Go back and verify what others claim. Repeat the experiments on your own equipment before introducing new variables.

Do your own experiments Eg analysing ant behaviour. No respect for fancy ideas that have no grounding in the real world. Theory is no use without application.

4 Adopt an attitude of critical thinking

Learn by understanding, not by rote. Angered by Brazilian school system. He is puzzled by the inability of others to see the world through the eyes of a scientist. Maths students and French curves: tangent always horizontal. Understand properties of materials eg UV doesn’t pass through windscreens – useful if you are watching an atomic bomb explode.

Many examples of learning to cooperate = teamwork. Homework sharing at college fraternity. Make friends and opportunities will follow.

Get to the real truth by reducing everything to first principles. Impressed by schoolmate who said follow the poles with the most wires. Look for novel solutions to real life problems. Nowadays he would be called a hacker.

7 Find your strengths and develop around them

You don’t “succeed” because you have no weaknesses; you succeed because you find your unique strengths and focus on developing habits around them. “Feynman has obsessive need to ‘undo’ what is secret” and refuses to give up on seemingly insoluble problems; radios, Mayan hieroglyphics, safecracking, maths problems.

8 Try things before condemning them Curiosity

Use yourself as a laboratory. Try things before condemning them. Understand the mind set associated with an activity then create new solutions and approaches to that activity. But experiment safely.

Find an expert and pay to be trained

+1 From another book about RF

If you want to get to the bottom of something, ask the workers, not the bosses. Challenger investigation.

Further reading: ‘What Do You Care What Other People Think?’, Further Adventures of … https://www.penguin.co.uk/books/56106/what‐do‐you‐care‐what‐other‐people‐think/

In this collection of short pieces Feynman describes everything from his love of beauty to college pranks to how his father taught him to think. He takes us behind the scenes of the space shuttle Challenger investigation, where he dramatically revealed the cause of the disaster with a simple experiment.

A collection of Video Lectures and Documentaries for a rainy afternoon (or month) http://www.richard‐feynman.net/videos.htm

A good one to start with: https://youtu.be/QRE0GxT6Zbw